25 Years is certainly something to celebrate

This month marks my 25th year at Quantum and as everyone who has been employed at one company for that length of time, I have plenty of memories…………..

It was quite some time after I had been working at Quantum when I first heard Joe talk about the products he has brought to the Glass Industry.  I had heard Joe speak before; but had never heard him speak directly with a customer.  It was with mesmerized pride that I listened; I knew I was hearing something spectacular.  It was as if he was speaking about one of his children; the accomplishments, the abilities and the results which made the purchase of Quantum’s products seemingly a no brainer.

In July of 1994, Joe’s oldest son, Steven began work full time at Quantum.  Prior to that time, he worked part-time at Quantum while going to high school and college.  Steve has been very lucky; it’s very rare that an employee has his father as his mentor on the job for twenty plus years.  And if you were to ask both of them what it was like working with each other, I’m sure neither would trade the experience they gained from each other.  In addition to having Quantum in common, they are both great golfers and the rivalry between them on the golf course is priceless.

Small companies are the backbone of this country and those that survive past the first ten years have usually found their niche in the business world.  Quantum has done this and more and as Controller of Quantum, I am very proud and grateful to have been an employee here for 25 years. 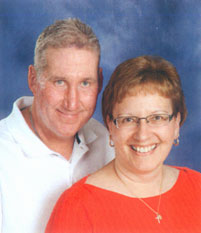 About the author:   Margaret Yucas lives in Leechburg, PA with her husband Christopher along with Thelma and Louise their two cats.  Also during this month, they are celebrating the ten year anniversary of “Marg” donating a kidney to Chris which she considers her greatest accomplishment in life.